All Collections
For All Users
Giving, Receiving, and Interacting with Recognition:
How to give a Manual Award

How to give a Manual Award

Learn how to give out recognition using Manual Awards!

Written by Amber Redig
Updated over a week ago

What are Manual Awards?

Manual Awards allow you to create company-funded awards, which means your company is recognizing individuals instead of recognition coming from peers. Before you can give an award, one of your Bonusly admins will need to create Manual Awards in your Bonusly account, which you can read about here.

There are two types of Manual Awards: templated and non-templated.

Templated Awards have pre-set information to standardize recognition for specific amounts and events. You won’t need to customize the message each time, so a quick and easy template makes it simple to recognize company-wide initiatives.

Non-templated Awards allow you to customize the message each time new recognition is given, making it easy to tailor the message and bonus amount.

Who can use this feature?

👩‍💻🧑‍🔧 Users who are designated as award givers and Global Admins

If you have permission to give out awards, you will see a dropdown arrow next to the give button on the home feed. When you click on the arrow, any awards available to give out will show up. Non-templated Awards are listed first, followed by Templated Awards. 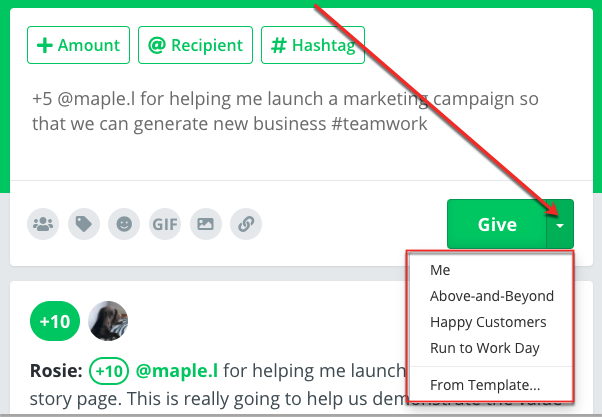 To give out a Non-templated Award, click on the award you would like to give and your monthly allowance will switch to show the available budget for that specific award! Giving out this award will not impact your personal allowance. 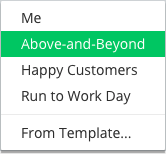 Now that you have selected the Award to give from, you can customize your recognition and select "Give from ...." to give the recognition! 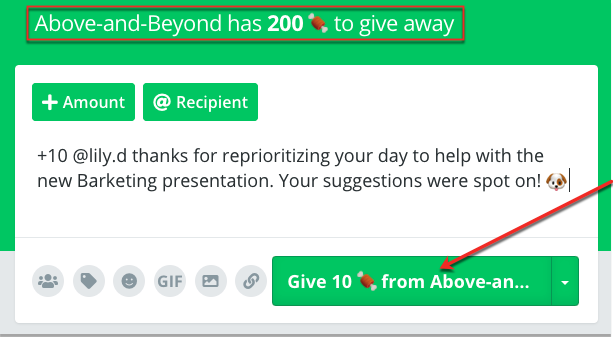 The recognition will show up in the public home feed and the receiver will receive an email notification letting them know they have earned a new award! 🎉

If the award you are trying to give needs approval, you will see a notification above the recognition text box. The award will not show up in the public feed until approved. 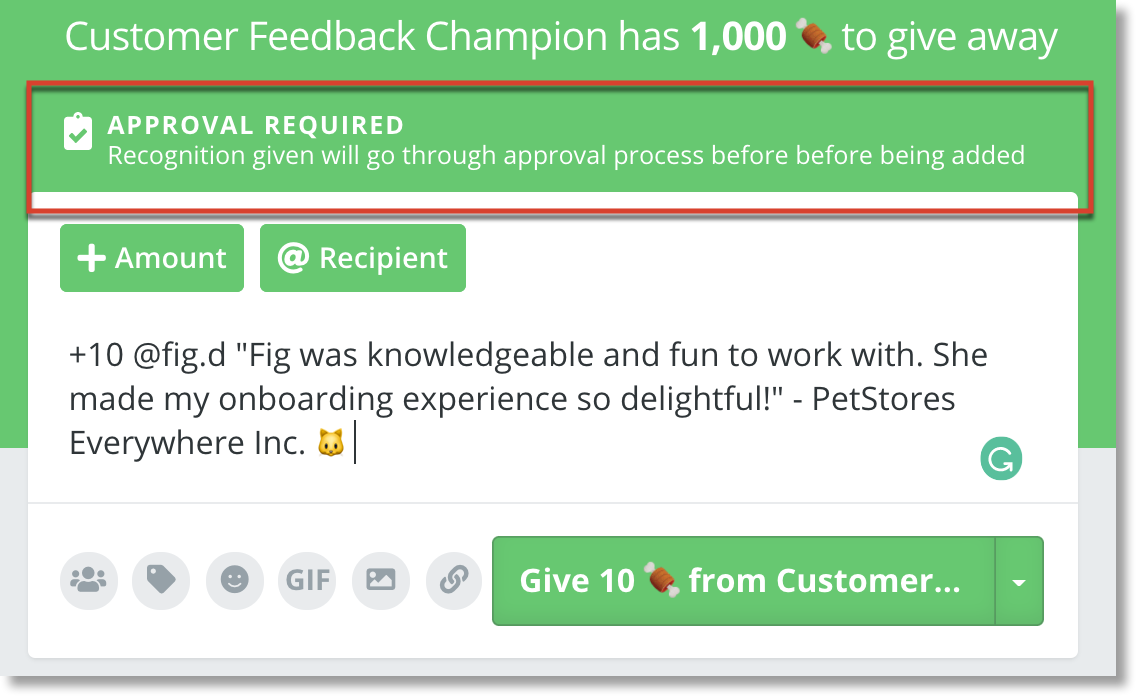 You will see a notification letting you know your award is off for approval!

Anyone with the permissions to give Templated Awards will now see the option "From Template..." appear in the drop-down on the give field. 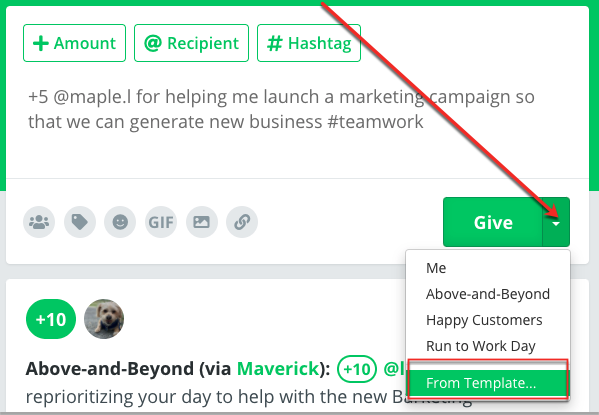 Click on "From Template" to see available award options, which will open the "Select an Award to give" window will open with all of the manual awards you're allowed to give from. 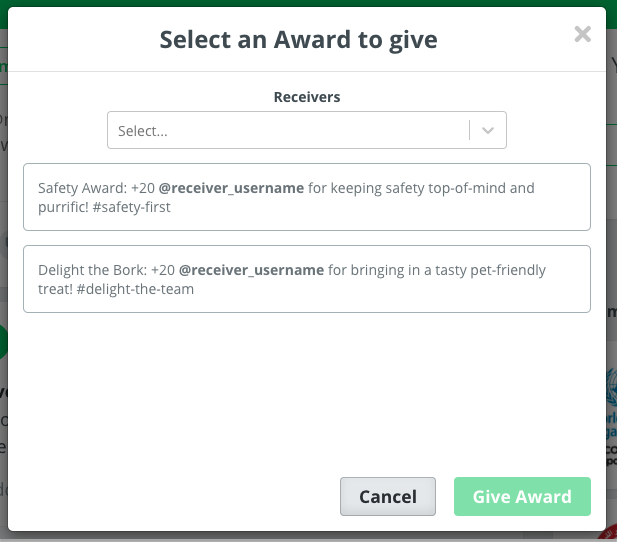 Next, choose "Receivers," the people to whom you are giving the award.

Once you have selected a user, the award previews will update to show what the recognition will look like in the public home feed. Choose the award you would like to give out and hit the "Give Award" button. Easy, right?! 💥 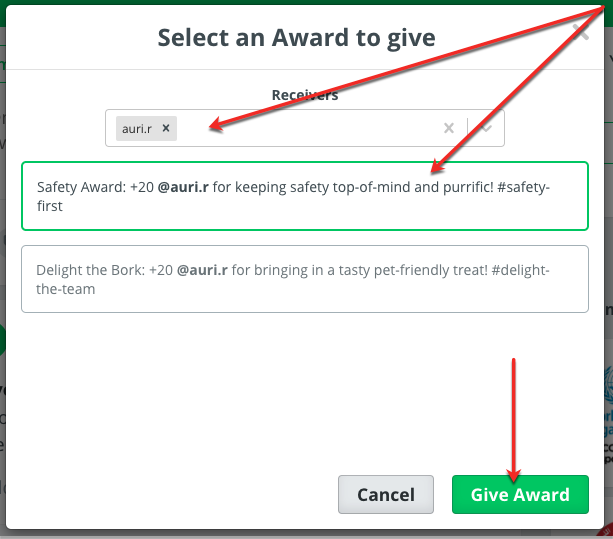 Pro tip: You can select more than one receiver for Awards to make it easy to recognize a group or team. 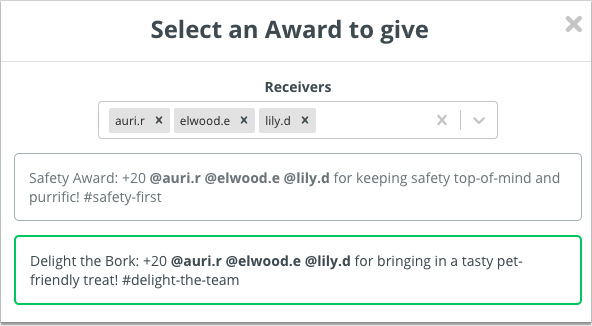 The award will appear instantly in your public feed and teammates are able to comment and add-on just like other recognition posts! 🙌

If the award you are trying to give needs approval, you will see a notification before you can give the Award. The award will not show up in the public feed until approved.

You will see a notification letting you know your award is off for approval!

That's it! Now you can start giving standardized bonuses from the company for specific contributions and events! 🎉

Questions about using Manual Awards? Shoot us a message at [email protected] and we'll get you squared away! 🤗